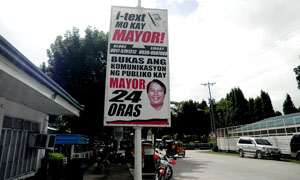 When mayor william n. Mamba assumed office on july 1, 2004,  he installed an innovative public service program to further enhance and improve the delivery of services to the people.

“i-text kay mayor” program is a 24/7 service that functions as a feedback mechanism for the people to bring to the attention of the mayor, their comments, views, problems, complaints and suggestions on any issue concerning local governance.  It also serves as a tool for citizen’s watch on illegal activities such as gambling, logging, and drug trafficking.  The program  greatly helps people in times of emergencies where requests for immediate assistance are directly received and acted upon.

The program plays a vital role in countering the proliferation of unlawful acts that tend to corrupt.  Abuses and misconduct of government employees and public officials are checked, thus, resulting in a disciplined, decent, reliable and respectable governance.