Naming of the town 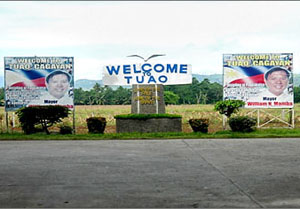 A story has it that when the cross was erected on this site, a big black bird slighted on top of it and as it flew, kicked the cross causing it to fall, and flying westward perched on a tree that stood on the present site of the church, all the while crying: “Bat ---- tu ----- ao,”. The incident was repeated three times which prompted the missionaries to move the church site to where the bird was interpreted to be leading them to. As the church was near completion, a Patron Saint must be identified for the Town and the date calendar for yearly celebration for what we now call town fiesta. Along

with this, came also the problem of naming the town. On advice of some town elders who, by now had learned a sprinkling of Spanish, the priests recalled the incident of the bird. Associating a divine intervention, they decided to adopt the cry of the bird: “Bat --- tu ---- ao,” dropping the first syllable and retained the last two forming the word “Tuao” and gave it as the name of the new pueblo. As for the Patron Saint, again referring to the bird, designated the Holy Guardian Angels since they are Messengers of God provided with the wings interpreting the bird as an angel taking the form of a bird. Since the feast of the Holy Guardian Angels falls on October 2, the date was officially declared as the Patronal Town Fiesta of Tuao.